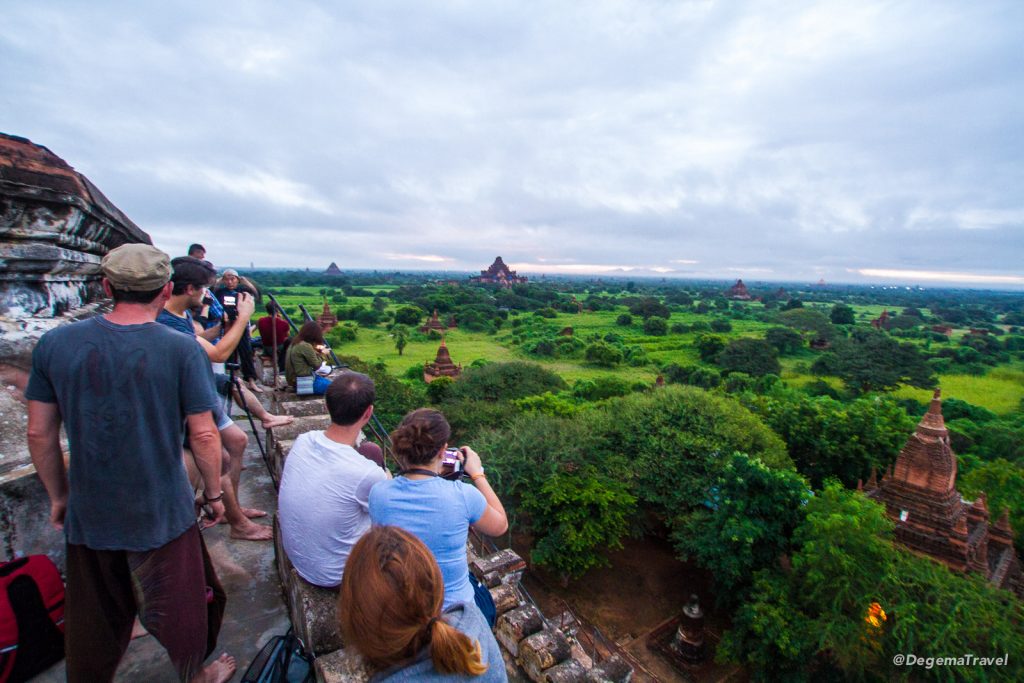 I said in my last post that there was an important lesson which I had failed to internalise from my Songkran travels around Thailand: the fact that going out exploring under the midday sun is a really bad idea. For the next leg of this trip around Myanmar, I decided to forget another important lesson: I do not handle long-distance bus trips at all well!

After about nine hours on an aggressively air-conditioned vehicle, traversing bumpy roads at speeds I don’t even want to think about, we reached Bagan. I was already a bit grumpy because I hadn’t had time to eat before we had to rush to the bus station in Yangon and I’d only been able to find some Pringles knock-offs in a convenience store at the comfort stop. Also, of course, it was stupidly early in the morning and I’d barely slept.

To then be faced with taxi drivers who, knowing they had a monopoly on getting tourists from the remote bus station to their hotels, offered only high prices and refused to haggle did not help my mood. What made it worse was that we had a guy with a wolf’s smile and pretty good English sort out the price and the ride, but he handed us over to a driver who could not speak clear and coherent English if his life depended on it. I already hated Bagan.

Funnily enough, my Thai friend could generally understand the driver’s ropey English better than I could and, with her doing most of the talking, we renegotiated the deal to include sunrise at Shwesandaw Pagoda. The weather wasn’t great, so it wasn’t as dramatic as the front cover image of the Lonely Planet guide we’d been using, but it was still an impressive sight.

The aspect of the panorama which finally managed to break through my fatigue-induced grumpiness was the way that, as the light brightened, more and more pagodas materialised out of the shadows. Having only been able to see three of the really big ones because they were illuminated or were silhouetted in the dawn light, hundreds more appeared, as if out of nowhere. By the time the sun had finished its morning flourish, we were surrounded by the little brown-brick structures on all sides, as far as the eye could see.

We were also surrounded by elephant pants.

This is a subject I’ve been planning to write about for some time and I would still rather make it a separate post, so some of this won’t make sense until I’ve done that post. However, there is a certain type of backpacker which really irritates me whenever I see them. That is not to say that all backpackers get on my nerves. We met a lovely couple from Austria, at the bus station in Yangon, who were backpacking all over Southeast Asia and they were a genuine pleasure to talk to. However, the other type (which I call “bergeners”, for reasons which you’ll have to read the dedicated post to understand) are not.

Generally speaking, a mark of the breed is the wearing of elephant pants. With only one or two exceptions, I have never seen a local or expatriate wearing elephant pants in Asia. They are exclusively for tourists, and then only the tourists who are gullible enough to believe they are some kind of special native dress. Among many other reasons, it is that wilful ignorance which annoys me about bergeners more than anything else.

Anyway, having battled back through the crowds of them and descended the pagoda, we grabbed our taxi and continued to the hotel in Nyaung-U.

I had originally hoped to have the rest of this day off to recover from the bus journey, but we quickly realised that Noom and Nan’s schedule would not allow that. My own timing was a little more relaxed because my flight home was the day after theirs, but our already dwindling available time meant that we did not have the luxury of a spare day. We had to make the most of this one.

Of the available options for exploring Bagan, we were initially interested in hiring a couple of motorbikes, but Noom’s dad is very protective of his kids and he forbade that. Of the choices which remained, we went with a horse-drawn trap. We rested for a couple of hours and used the pathetically slow hotel Wi-Fi before setting out, once again under the midday sun.

I did feel a little guilty about taking this option, particularly when the trap arrived and the horse’s coat looked a little rough; kind of like it had just had a really bad haircut. There weren’t any open wounds and it wasn’t all skin-and-bones, but it didn’t look quite as healthy as some of the others we saw around the area. It was strong and resilient, though, and carried around for about six hours, nearly continuously.

Yes, you read that right. Six. Hours. We trotted around the Bagan Archaeological Park for a full quarter of a day (perhaps barring most of an hour for lunch and a bit of time to drink the contents of a coconut larger than my head!), just looking at pagodas and other religious sites. In all honesty, I’d kind of seen enough pagodas after the first handful. I had lost count by the time Noom and Nan stopped even bothering to go inside most of them, choosing to just look around the outside and snap a few photos before finding somewhere to sit and wait for me to finish.M

The story behind Bagan is that the ruler of the area took to Buddhism in a huge way, some time around the 11th century and immediately decided that he wanted his capital city to become the religion’s principle city. So, over the following few centuries, there was almost constant construction of at least 3,300 known pagodas, temples and monasteries. The exact reason why construction suddenly halted and Bagan went into a crippling social and economic decline is lost to history. The place just suddenly all but vanished off the map, taking its amazing cultural heritage with it; storing it out of time. Now that it has returned to prominence, I feel that over 3,000 almost identical structures was perhaps overdoing it a touch.

Frankly, I reached the stage where I never want to see another pagoda as long as I live. My appetite for them is very comprehensively sated. On the bright side, I did “get the t-shirt” (to prove that I’d been there and done that), though only because a stall-holder took it upon herself to give me the full story about the only Hindu temple in Bagan and, once she’d finished, refused to let me leave without buying something. It was kind of a scam, I suppose, but she effectively haggled herself down to a pretty reasonable price and the t-shirt isn’t that bad.

One highlight of the day, which managed to bring a little life back into my by-now battered feet, was getting an outstanding view of the Ayeyarwady River from Bupaya Stupa. Thanks to the influence of my grandad and his time in Burma (when it still was Burma), I still thought of it as the Irrawaddy River, and it still has the same wild look to it that I imagine it did in the 1940s. The land on the other side of the very wide brown watercourse looked mountainous and hazardous – completely untamed. It was the closest I have felt to my grandad since before his death.

After that and one or two more temples, we returned to the hotel where Noom and I proceeded to desperately hope for enough Wi-Fi bandwidth to actually load a hotel page on one or other online travel agency, let alone book a room. Finally just settling on whatever looked vaguely good, didn’t cost too much and still had rooms left, I had an early night and a very late morning, barely getting my bags packed and out of the room before the 11pm check-out time! I had a really tasty lunch of Shan-style noodles, which came with a sauce very similar in taste to Thai tamarind sauce. About an hour later, we boarded a small but comfortable bus and started down the road to Mandalay.