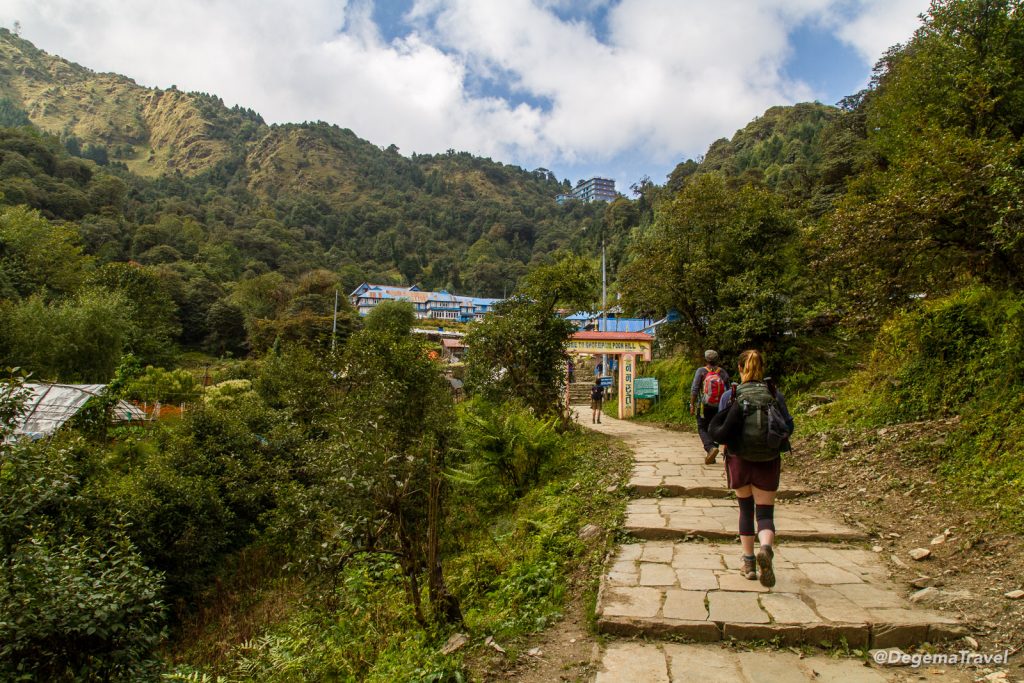 I could almost believe that the Annapurna Loop involving so many steps on the first day is part of a clever scam to convince overweight and under-fit trekkers like myself to hire a porter. Because that’s exactly what I did, not particularly wanting a second day of coming quite so close to crippling depression and utter exhaustion.

While I had felt that hiring a porter was, in some way, admitting defeat, I consider 2,200 rupees per day to be a relatively small cost for my own enduring mental and physical wellbeing. Frustratingly, I can’t remember the porter’s name and I didn’t make a note of it in my journal, which is going to make me feel rather shameful continuing to tell the tale of my trip and sounding like some imperialist explorer of old, but I’ll have to swallow that and press on.

And manfully pressing on is precisely what we did, setting off up the remaining steps to reach the little village of Ulleri. We’d stopped on the outskirts the previous night and, while we weren’t that far short of it, it was further than I would have liked to try in the dark. Even these relatively few steps were enough to convince me that hiring the porter was a shrewd move.

During this portion of the trek, Bishnu (my guide, provided by Osho Vision Treks & Expedition P. Ltd. in Kathmandu) and the porter took pity on me and, finding and trimming a sturdy length of bamboo, crafted a makeshift walking pole for me. This proved to be a huge help and I soon found a rhythm that kept me going with fewer stops and less drinking water needed. In fact, it reached the point that Bishnu was getting me to stop for breaks more often than I needed them.

As mentioned in the previous post, what I’ve found happens in endurance situations like these is that you soon start to recognise some familiar faces who are travelling at about the same pace as you. You pass them as they stop for a break and they pass you when it’s your turn for a rest and, pretty soon, you develop a nodding acquaintanceship. Assuming you don’t freak them out with your incessant counting, of course.

One such person – a bearded Irishman – decided to take our acquaintanceship to a first-name basis. When we stopped for lunch at the same teahouse, he invited me to come and eat with him and his Nepali friend. The Irishman’s name was Mark and, in another unfortunate coincidence that makes me look like an old-school imperialist, I didn’t catch or record his friend’s name. To be fair, Mark did most of the talking – I’m not sure his friend even spoke to me. Anyway, Mark had developed one of the first ever password vault apps for iPhone and was now comfortably living between London, a French ski resort and frequent trekking trips on the income that generated.

We talked at length about our pasts, work and all the usual stuff before I took the conversation in a slightly philosophical direction. He said, probably in response to my commenting about being horribly unfit for yesterday’s steps, that he never really trained for his treks but that, after two or three days of pain, he generally got into a groove and could then enjoy his surroundings instead of focussing on just making it up the next few steps. I asked why he would endure that pain – what did he enjoy about trekking? He said that he found it almost meditative as he was able to enter a state of serene contemplation once he had found that groove. He added that trekking also brings about a sense of post-workout accomplishment on a scale you don’t get from a few hours in the gym, with the added bonus of the cool, restful evenings around the wood-burning stove in the teahouses.

“You made it then”

After Ulleri, the path had levelled out considerably, to the extent that I could probably have managed it without needing the porter (hence my earlier joke that it might be a scam). There were still a few steps from time to time and the occasional gentle incline, but it was mostly just a pleasant dirt track through peaceful forests. I didn’t get many photos, unfortunately, because Bishnu was still carrying my camera bag.

Once I twigged that I was the one being addressed, I turned to see another familiar face – the second of the pace mates I’d made on the trek up here. Laura was a mental health nurse from England, in Nepal as part of a training placement with one of the many companies that organise work/travel trips. She had seemed to be struggling a bit with the steps when I encountered her earlier in the day and, feeling her pain, I’d offered some encouragement. She’d actually started from the bottom of the hill I’d half-conquered the previous evening and still made it to Ghorepani before me, so she obviously didn’t need my encouragement that much!

Dinner with the doctors

As we were chatting on the patio, her companions joined us – a group of mostly doctors, mostly from Australia, all on similar work/travel placements. There was Ben, who seemed to have a bit of a South African accent and was so supremely confident in his own fitness that he’d already decided he would leave the rest of the group behind the next day and might even take a little detour to add an impromptu visit to the Annapurna Base Camp to his trip. Then there was Amy, who clearly had some Chinese heritage and was a little weird at times, but generally pleasant. The other two in the group – one of Indian extraction and an older lady originally from Brighton – didn’t talk much and, as a result, I didn’t remember their names well enough to note them in my journal at the time.

As the day drew towards a close, we took a quick shopping trip into town before having dinner together – classic dal baht, of course. It’s a great choice for trekkers, not only because it’s pretty healthy and packed with carbs; not even because it’s generally the cheapest item on the menu. It’s the only dish that your hosts will endlessly offer to refill at no extra cost. You can order it once and eat until you’re fit to burst as they cook it in bulk and would rather see it eaten than wasted.

The doctors and I played cards into the evening, but called it a night relatively early. We had to be up early in the morning to see the sunrise from Poon Hill.

Posted on11 May 202112 May 2021  |  Leave a comment on Annapurna Loop to Poon Hill, Day 2 – The Friendly Path to Ghorephani Tagsfeatured Ghorepani Nepal Ulleri