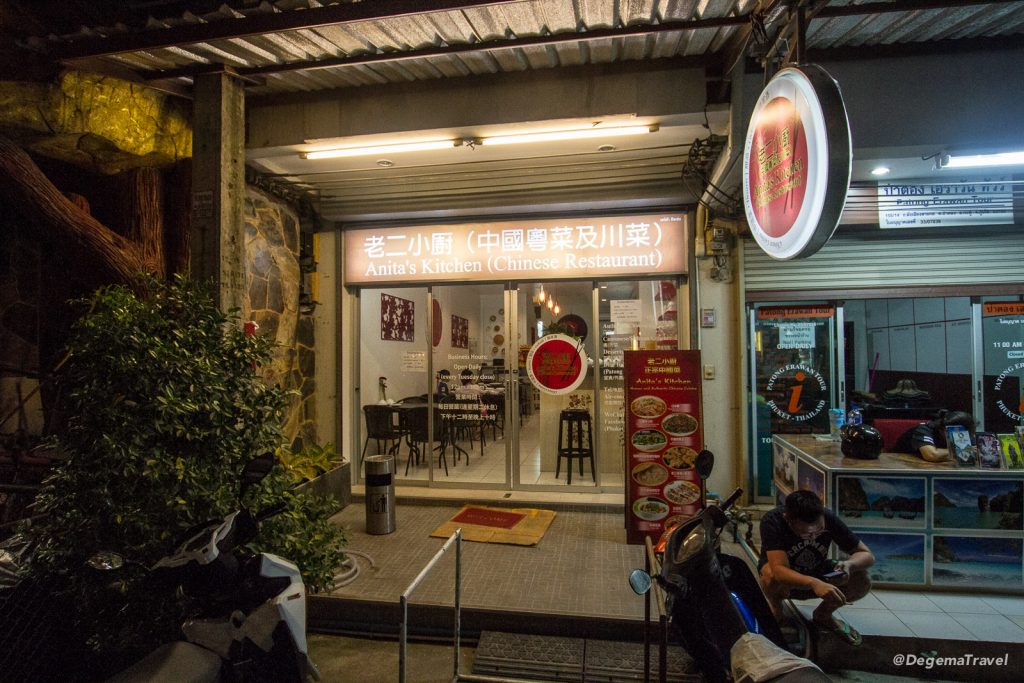 This last week has been quite a busy one for me. Not only did it contain Valentine’s Day, but also Chinese New Year. As my girlfriend is Chinese, there was quite a lot for me to do. Said girlfriend owns and runs a Chinese restaurant in Patong called Anita’s Kitchen, so it struck me that the most romantic and meaningful gift I could give was time – that most valuable and irreplaceable of commodities. Specifically, my holiday time as Friday 16th February 2018 was a national holiday in Thailand.

Figuring that Chinese New Year would be a busy day at one of the top Chinese restaurants in Phuket, I volunteered to help my girlfriend out. While I’m not that much of a chef, I have some experience with in basic food retail jobs. I can wash and dry crockery, clear and clean tables and transport food from the kitchen to the diner – all quite simple skills, but me doing those jobs would take some of the pressure off my girlfriend.

I said that I have some experience in the food retail industry. Well, that comes from my very first job. From 5th February to 4th November 2004, I worked at one of the two branches of the Cornish Pasty Bakery in York. I got the job through a good friend, who I’d known since I started secondary school six years before. A veteran of the company, he had been promoted to the role of baker (if you can call taking frozen pasties out of the walk-in freezer and sticking them in the giant ovens for the prerequisite time “baking”). I started as a lowly server.

In all honesty, I wasn’t especially good at the job. I was 16 at the time, and very quiet and shy – not the best attributes for a server in a busy bakery. I was also already quite tall, by this age, which made every task a painful experience, whether I was washing the giant metal trays the pasties were heated on, preparing the sandwiches and other foodstuffs the shop sold or taking the pasties off the heated display cabinets to serve to the customers. In every case, the work surface was just that little bit too short, meaning I spend most of my eight-hour day bending over, putting a lot of pressure on my back.

On the flip-side, I wasn’t being paid that much. I worked one day per week and made about £20 – well below minimum wage, but I wasn’t old enough to be able to expect minimum wage. As I didn’t actually live in York, just the cost of the bus ticket to get to and from work would take away a quarter of my day’s pay! What was left went into my fund to buy a new computer – an Apple eMac (to give you a clearer idea of just how long ago this was). As soon as I had the necessary money, I quit.

As much as I may have disliked my first job at the time, the lessons it taught carried over to this latest one. As the lunch service started at Anita’s Kitchen, I was on-station to deliver dishes, thinking about how I could do my best for the benefit of my girlfriend – Anita herself. In my pocket was a scrap of paper, on which I’d asked Anita to write an anglicised form of the Chinese for “Happy New Year” – Kung Xei Fat Choy – so that I could greet the mostly Chinese customers with it. This was later supplemented by other Chinese phrases, transcribed from Google Translate.

After we set off some deafening firecrackers, the first customers arrived and I started delivering dishes. I was constantly looking for other ways I could help, including preparing bowls of rice (“baifan”, as my scribbled note called it). As customers were leaving, I was clearing tables and then washing the dishes – something I’ve had experience with since I was a child, doing the dishes with my brother for my mum. Believe it or not, there is actually some skill to it. Done properly, you can properly clean a mammoth pile of dirty pots in no time. Done badly, you have delays, residual dirt and, at worst, breakages.

This story ended up being quite a long one in the telling, especially with the inclusion of the details of my previous experience (because every good story includes little details of other stories!). I decided to split the piece in half and release it in two posts over the the course of this week, so that you’re not having to read a huge amount of story in one go. Look out for Part 2 on Saturday!